Marian devotions are external pious practices directed to the person of Mary, mother of Jesus, by members of certain Christian traditions.[1] They are performed in Roman Catholicism and Orthodox Christianity, but generally rejected in Protestant denominations.

Such devotional prayers or acts may be accompanied by specific requests for Mary’s intercession with God.[2][3] There is significant diversity of form and structure in Marian devotions practiced by different groups of Christians. Orthodox Marian devotions are well-defined and closely linked to liturgy, while Roman Catholic practices are wide-ranging – they include multi-day prayers such as novenas, the celebration of Canonical coronations granted by the Pope, the veneration of icons in Eastern Christianity, and pious acts which do not involve prayers, such as the wearing of scapulars or maintaining a Mary garden.[4]

Marian devotions are important to the Roman Catholic, Orthodox and Anglican traditions, but most Protestant views on Mary do not accept them, because such devotions are not recorded or promoted in the Bible. They believe this devotion may distract attention from Christ.[5] According to practitioners, devotion to the Virgin Mary does not amount to worship, which is reserved for God. Both the Catholic and Orthodox traditions view Mary as subordinate to Christ, but uniquely so, in that she is seen as above all other creatures. In 787 the Second Council of Nicaea affirmed a three-level hierarchy of latria, hyperduliaand dulia that applies to God, the Virgin Mary and then to the other saints.[6][7] 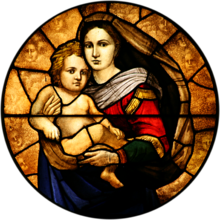 The emphasis placed on Mary and Marian devotions changed over the history of Anglicanism. In the 16th century, following the independence of the Church of England from Rome, a movement away from Marian themes took place; by 1552 mentions of Mary had been reduced to only two or three times a day in the Book of Common Prayer but the Marian feasts of the Annunciation and the Purification had been retained. However, in the 17th century, there was a gradual return to Marianism and by 1662 there were five Marian feasts.[9]

British devotion to the Virgin Mary has often been expressed in poetry, Marian hymns, and Carols, e.g., in the 17th-century poems of John Donne and George Herbert, or in the 18th-century works of Thomas Ken such as Saint Mary the Virgin.[10][11]

Marian Votive Shrine at the Anglo-Catholic Church of the Good Shepherd (Rosemont, Pennsylvania)

Anglican devotion for the Virgin Mary was revived during the 19th century Oxford Movement of Anglo-Catholicism and by the activities of prominent figures such as John Henry Newman.[12] British theologians such as Father Frederick Faber (who composed several hymns to Mary) took an enthusiastic approach to the promotion of Marian devotions towards the end of the 19th century.[13]

In the liturgical renewal of the 20th century, Mary gained new prominence, and in most Anglican prayer books she is mentioned by name in the Eucharistic prayers.[14] The gradual increase in Marian devotions among Anglicans has also been manifested within the higher levels of the clergy in the Anglican Communion. Archbishop of CanterburyRowan Williams (who made a 2008 pilgrimage to Our Lady of Lourdes) wrote a book on how to pray with the icons of the Virgin Mary.[15][16]

Anglican devotions to Mary include the Anglican Rosary (similar to the Catholic rosary), votive candles, and pilgrimages to Walsingham and Lourdes. Some Anglicans and Anglo-Catholics also pray the rosary itself.[17][18][19] For centuries, Our Lady of Walsingham has been a centerpiece in Anglican devotions to the Virgin Mary and its feast is celebrated on October 15,[20] as well as a Catholic feast on September 24.[21][22] Also common in Anglican cathedrals, Anglo-Catholic parishes, and certain Anglican shrines are chapels or side altars dedicated to the Virgin Mary called Lady chapels.[23]

Our Lady of Kazan has been the subject of devotions both in the Catholic Church and in Eastern Orthodoxy.[26][27]

A deep devotion to the “Aeipartenos” (i.e., Ever Virgin) Mary is one of the key themes of Orthodox liturgy and spirituality. Devotion to the Virgin Mary is “taken for granted” in Eastern Orthodoxy. It permeates the entire life of the Church and historically required no academic development as in the Western Church.[28]

The Theotokos (i.e., God-bearer, or Mother of God) title for Mary is very important in Eastern Orthodoxy and is seen as an affirmation of the fullness of God’s incarnation.

The Orthodox approach to Marian devotions is characterized by three elements:

The Eastern Orthodox Church considers Mary to have been elevated by God to the highest status, above all other creatures, though still only a human being. The Orthodox hymn Axion Estin speaks of Mary as being “More honorable than the cherubim and more glorious beyond compare than the seraphim.” Although most Orthodox consider Mary sinless, they do not accept the Roman Catholic definition of the Immaculate Conception of Mary.[31]

Mary is mentioned numerous times in all of the Divine Services and the Divine Liturgy. The final petition of each ektenia (litany) ends with an invocation of the Virgin Mary. When a series of troparia are chanted, the final one is often a Theotokion (hymn to the Virgin Mary). There are numerous Marian litanies in the Eastern church and may cover a multitude of themes, some dogmatic, others of moral and patriotic character.

One of the most important Marian devotions is the Akathist to the Theotokos, which is chanted every year during Great Lent, and is frequently chanted throughout the year as a private devotion. Some people chant the Akathist as part of their preparation for Holy Communion. A metrical translation of an ancient Orthodox prayer is found in the second verse of the Anglican hymn, Ye Watchers and Ye Holy Ones. 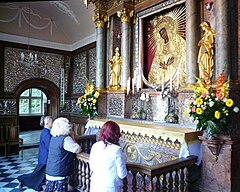 Praying before Our Lady of the Gate of Dawn in Vilnius, Lithuania

Marian devotions are prominent within the Roman Catholic tradition. Pope Paul VI began his Apostolic Exhortation Marialis Cultus saying, “From the moment when we were called to the See of Peter, we have constantly striven to enhance devotion to the Blessed Virgin Mary”.[36]

In Rosarium Virginis Mariae, Pope John Paul II emphasized the importance of Marian devotions: “Since Mary is of all creatures the one most conformed to Jesus Christ, it follows that among all devotions that which most consecrates and conforms a soul to our Lord is devotion to Mary”.[37]

At the popular level, for centuries books such as True Devotion to Mary have built a ground swell of Marian devotions among Catholics, to the point that tens of millions of pilgrims visit Marian shrines every year.[38] The statue of our Our Lady of Zapopan attracts over one million pilgrims on 12 October each year as the statue travels through the streets moving from one cathedral to another.[39][40]

Marian devotions can take a unifying national dimension, e.g., devotion to Our Lady of Guadalupe is a national symbol in Mexico, and in 1979 Pope John Paul II placed Mexico under her protection.[41] Similarly, national devotions to Our Lady of Šiluva resulted in Lithuania being formally consecrated to Mary by Cardinal Sladkevicius and the Chairman of the Lithuanian Parliament, in September 1991.[42]

Marian devotions are also associated with a number of beliefs among Catholics which have not been dogmatically approved by the Church, but have been asserted by saints and theologians. An example is the belief that devotion to Mary is a sign of predestination.[43] Saint Bernard of Clairvaux in the 12th century, Saint Bonaventure in the 13th century, and Saint Alphonsus Ligouri in the 18th century affirmed this belief, and 20th century theologian Reginald Garrigou-Lagrange, who taught Pope John Paul II, supported it with modern theological arguments regarding the “signs of predestination”.[44][45][46]

Practically all Marian devotions and pious exercises are in some way related to the liturgical feasts of the General Calendar of the Roman Rite or of the particular calendars of dioceses and religious congregations. Saturdays are dedicated to the Virgin Mary, designated as memorials of the Blessed Virgin Mary. This practice derives from Carolingian times (ninth century).[47] The month of May has been traditionally dedicated to Mary.[48]

The Angelus is a traditional prayer used to commemorate the Annunciation of the angel Gabriel to Mary. It is used three times daily: at dawn, mid-day and at dusk. During Eastertide, the Angelus is replaced with the Regina Coeli an antiphon, dating from the tenth or eleventh century. The Rosary, or Psalter of the Blessed Virgin Mary is essentially a contemplative prayer. The Litany of Loreto is the most well-known Marian litany.

Christians have often conducted processions honoring Mary. These processions have been largely restricted to Catholic and Orthodox cultures since the 16th century. In Los Angeles, California, a Marian procession took place annually for about the first 100 years following the founding of the city in 1781. The Queen of Angels Foundation, founded by Mark Anchor Albert, revived this annual procession in September 2011 in Downtown Los Angeles,[49] to coincide with the anniversary of the founding of the city.[50]

There is also an interplay between these types of devotion, e.g., the apparitions of Lourdes emphasized the Rosary and those of Fatima reported the Virgin Mary with the Rosary and scapular. Regional devotions continue to generate local support such as festivals and celebrations. The festival of Our Lady of Solitude of Porta Vaga in the Philippines has been celebrated for centuries, and its icon continues to be venerated.[64]Each year around Pentecost, as part of a local Marian devotion, about a million people attend the Romería de El Rocío in Spain.[65]

Many other forms of devotional expression take place. For example, there has also been the long established practice of dedicating side altars in Catholic churches, often called Lady Chapels, to Mary.[66]