The virgin birth of Jesus is the doctrine that Jesus was conceived and born by his mother Mary through the power of the Holy Spirit and without the agency of a human father.[1] The idea is found only in the gospels of Matthew and Luke.[2] It is enshrined in the Nicene Creed (“incarnate of the Virgin Mary”) and the Apostles’ Creed (“born of the Virgin Mary”),[3] the Catholic church holds it authoritative for faith and Protestants regard it as an explanation of the mixture of the human and divine natures of Jesus,[1] but the scholarly consensus is that its historical foundations are very flimsy.[4]

Composition of Matthew and Luke

In the entire Christian corpus the virgin birth is found only in the Gospel of Matthew and the Gospel of Luke.[5] Both probably date from the period AD 80-100, both are anonymous (the attributions to Matthew and Luke were added in the 2nd century), and it is almost certain that neither was the work of an eyewitness.[6][7][8]

Matthew underlines the virginity of Mary by references to the Book of Isaiah (using the Greek translation in the Septuagint, rather than the Hebrew original) and by his narrative statement that Joseph had no sexual relations with her until after the birth (a choice of words which leaves open the possibility that they did have relations after that).[9]

18: Now the birth of Jesus the Messiah took place in this way. When his mother Mary had been engaged to Joseph, but before they lived together, she was found to be with child from the Holy Spirit.
19: Her husband Joseph, being a righteous man and unwilling to expose her to public disgrace, planned to dismiss her quietly.
20: But just when he had resolved to do this, an angel of the Lord appeared to him in a dream and said, “Joseph, son of David, do not be afraid to take Mary as your wife, for the child conceived in her is from the Holy Spirit.
21: She will bear a son, and you are to name him Jesus, for he will save his people from their sins.”
22: All this took place to fulfill what had been spoken by the Lord through the prophet:
23: “Look, the virgin shall conceive and bear a son, and they shall name him Emmanuel,” which means, “God is with us.”
24: When Joseph awoke from sleep, he did as the angel of the Lord commanded him; he took her as his wife,
25: but had no marital relations with her until she had borne a son; and he named him Jesus.

Luke introduces Mary as a virgin, describes her puzzlement at being told she will bear a child despite her lack of sexual experience, and informs the reader that this pregnancy is to be effected through God’s Holy Spirit.[10]

26: In the sixth month the angel Gabriel was sent by God to a town in Galilee called Nazareth,
27: to a virgin engaged to a man whose name was Joseph, of the house of David. The virgin’s name was Mary.
28: And he came to her and said, “Greetings, favored one! The Lord is with you.”
29: But she was much perplexed by his words and pondered what sort of greeting this might be.
30: The angel said to her, “Do not be afraid, Mary, for you have found favor with God.
31: And now, you will conceive in your womb and bear a son, and you will name him Jesus.
32: He will be great, and will be called the Son of the Most High, and the Lord God will give to him the throne of his ancestor David.
33: He will reign over the house of Jacob forever, and of his kingdom there will be no end.”
34: Mary said to the angel, “How can this be, since I am a virgin?”
35: The angel said to her, “The Holy Spirit will come upon you, and the power of the Most High will overshadow you; therefore the child to be born will be holy; he will be called Son of God.
36: And now, your relative Elizabeth in her old age has also conceived a son; and this is the sixth month for her who was said to be barren.
37: For nothing will be impossible with God.”
38: Then Mary said, “Here am I, the servant of the Lord; let it be with me according to your word.” Then the angel departed from her.

Matthew and Mark agree that Mary’s husband was named Joseph, that he was of Davidic descent, and that he played no role in Jesus’s conception, which instead was divinely affected.[2] But despite the overlaps, the two stories are very different:[11]

Historicity and sources of the narratives

The modern scholarly consensus is that the virgin birth rests on very slender historical foundations.[4] The Pauline epistles do not contain any mention a virgin birth, or indeed any mention at all of Jesus’s birth, and assume his full humanity; for Paul, Jesus became the son of God only at his resurrection.[12] Mark, the earliest gospel, likewise has no virgin birth story and states that Jesus’s mother had no belief in her son, as if she had she forgotten the angel’s visit.[13] John says that Christian believers are born from God, but does not say this of Jesus; his Jesus has both father and mother and his conception does not entail divine intervention.[14]

This raises the question of where Matthew and Luke found their stories. The majority view is that they each used the Gospel of Mark as the source for their narrative of the life of Jesus, but Mark has no birth story.[15][16] It is equally improbable either was derived from the other, or that they shared a common source.[5] Raymond E. Brown suggested in 1973 that Joseph was the source of Matthew’s account and Mary of Luke’s, but modern scholars consider this “highly unlikely”, given that this so-called family tradition emerged so late.[17] It follows that the two narratives were created by the two writers, although the idea behind them probably originated a decade or so earlier, approximately 65-75 AD.[18]

The virgin birth tradition might have originated as a response to early Jewish slurs against Jesus and an assertion that he and his birth were holy;[19] indeed, although most scholars believe that Matthew does teach a virginal conception, a significant minority think he might be mounting a defense against accusations of rape or illegitimacy.[20]

Giotto (1267–1337): Nativity with an uninvolved Joseph but without Salome

In 1st-century Judea, Jewish girls were betrothed around the age of twelve or twelve and a half.[21] During the betrothal period, which lasted about a year, the marriage was not consummated and the bride remained in her parents’ house.[22] Betrothal was formalised by a contract, and voiding the contract required a divorce document freeing the girl to remarry.[23]

The ancient world had no idea that male semen and female ovum were both needed to form a fetus; instead they thought that the male contribution in reproduction consisted of some sort of formative or generative principle, while Mary’s bodily fluids would provide all the matter that was needed for Jesus’ bodily form, including his male sex.[24] This cultural milieu was conducive to miraculous birth stories – they were common in biblical tradition going back to Abraham and Sarah.[25] They may also have roots in Hellenistic mythology, although there is no emphasis in Hellenistic stories on the virginity of the women giving birth by the gods.[26] Matthew uses Isaiah 7:14 to support his narrative, but scholars agree that the Hebrew word used in Isaiah, “almah”, signifies a girl of childbearing age without reference to virginity, and the prophesy has an immediate application.)[27][28]There is also the hypothesis that the stories were written to answer Jewish slanders about Jesus’ illegitimate birth,[29] of which there is evidence from the 2nd century, although these may have been a subsequent polemical Jewish response to the account in Matthew and Luke.[30]

Tales of virgin birth and the impregnation of mortal women by deities were well known in the 1st-century Greco-Roman world,[22] and Second Temple Jewish works were also capable of producing accounts of the appearances of angels and miraculous births for ancient heroes such as Melchizedek, Noah, and Moses.[31] Luke’s virgin birth story is a standard plot from the Jewish scriptures, as for example in the annunciation scenes for Isaac and for Samson, in which an angel appears and causes apprehension, the angel gives reassurance and announces the coming birth, the mother raises an objection, and the angel gives a sign.[32] Nevertheless, “plausible sources that tell of virgin birth in areas convincingly close to the gospels’ own probable origins have proven extremely hard to demonstrate”.[33] Similarly, while it is widely accepted that there is a connection with Zoroastrian (Persian) sources underlying Matthew’s story of the Magi (the wise men from the East) and the Star of Bethlehem, a wider claim that Zoroastrianism formed the background to the infancy narratives has not achieved acceptance.[33]

See also: Denial of the virgin birth of Jesus

A major purpose of the narratives in Matthew and Luke was to counter the docetic claim that denied the full humanity of Jesus, [34] but throughout Christian history a small number of groups have denied the virgin birth.[35] This view existed among some early Jewish Christian groups such as some of the Ebionites who considered Jesus the Messiah, but rejected the apostle Paul as an apostate.[36] However, in the 4th century the Nicene Creed rejected the teaching that Jesus was a mere human.[37]

In the 2nd century the philosopher Celsus wrote that Jesus’s father was a Roman soldier named Pantera; Celsus drew responses from Origen, who considered it a fabricated story. Raymond E. Brown states that the story of Pantera is a fanciful explanation of the birth of Jesus which includes very little historical evidence.

In the Middle Ages, as part of the conflicts with Christians, a satirical parody of the Christian gospels called the Toledot Yeshu was written. The book referred to Pantera, or Pandera, as the father of Jesus.[38][39][40][41][41] Robert E. Van Voorst states that the literary origins of Toledot Yeshu cannot be traced with any certainty, and that, given its medieval composition without a fixed form, it is “most unlikely” to contain reliable historical information.[42] The Blackwell Companion to Jesus states that the Toledot Yeshu contains no historical facts as such, and was perhaps created as a tool for warding off conversions to Christianity.[38] 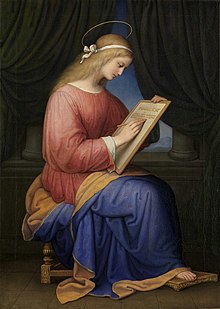 Christians celebrate the conception of Jesus on 25 March and his birth on 25 December. (These dates are for the Western tradition – Orthodoxy has a different calendar). The Magnificat, based on Luke 1:46-55 is one of four well known Gospel canticles: the Benedictus and theMagnificat in the first chapter, and the Gloria in Excelsis and the Nunc dimittis in the second chapter of Luke, which are now an integral part of the Christian liturgicaltradition.[43][44][45] The Magnificat is one of the eight most ancient Christian hymns and perhaps the earliest Marian hymn.[46][47] The Annunciation, representing the virgin birth, became an element of Marian devotions in Medieval times, and by the 13th century direct references to it were widespread in French lyrics.[48]

The Eastern Orthodox Church uses the title “Ever Virgin Mary” as a key element of its Marian veneration, and as part of the Akathists (hymns) to Mary which are an integral part of its liturgy.[49]