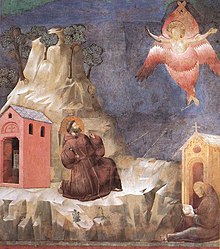 St. Francis’ vision of a seraph (fresco attributed to Giotto)

A seraph (“the burning one”; seraphs or seraphim, in the King James Version also seraphims (plural); Hebrew: שָׂרָף śārāf, plural שְׂרָפִים śərāfîm; Latin: seraphim and seraphin (plural), also seraphus (-i, m.);[1]Greek: σεραφείμ serapheím Arabic: مشرفين Musharifin[2]) is a Hebrew-origin word referring to a type of celestial or heavenly being originating in Ancient Judaism. The term plays a role in subsequent Judaism, Christianity, and Islam.[3] The singular “seraph” is a back-formation from the Hebrew plural-form “seraphim”, whereas in Hebrew the singular is “saraph”.[4]

Tradition places seraphim in the highest rank in Christian angelology and in the fifth rank of ten in the Jewish angelic hierarchy. A seminal passage in the Book of Isaiah (Isaiah 6:1-8) used the term to describe six-winged beings that fly around the Throne of God crying “holy, holy, holy”. This throne scene, with its triple invocation of holiness (a formula that came to be known as the Trisagion), profoundly influenced subsequent theology, literature and art. Its influence is frequently seen in works depicting angels, heaven and apotheosis. Seraphim are mentioned as celestial beings in an influential Hellenistic work, the Book of Enoch, and the Book of Revelation.

The vision in Isaiah Chapter 6 of seraphim in an idealized version of Solomon’s Temple represents the sole instance in the Hebrew Bible of this word being used to describe celestial beings.[7] “… I saw also the Lord sitting upon a throne, high and lifted up, and his train filled the temple. Above it stood the seraphims: each one had six wings; with twain he covered his face, and with twain he covered his feet, and with twain he did fly.” (Isaiah 6:1–3) And one cried to another, “Holy, holy, holy, is YHWH the Lord of hosts: the whole earth is full of his glory.” (verses 2–3) One seraph carries out an act of ritual purification for the prophet by touching his lips with a live coal from the altar (verses 6–7).

The text describes the “seraphim” as winged celestial beings with a fiery passion for doing God’s good work.[8] Notwithstanding the wording of the text itself, at least one Hebrew scholar claims that in the Hebrew Bible the seraphim do not have the status of angels, and that it is only in later sources (like De Coelesti Hierarchia or Summa Theologiae) that they are considered to be a division of the divine messengers.[9]

Seraphim appear in the 2nd-century BC Book of Enoch,[10] where they are mentioned, in conjunction with cherubim, as the heavenly creatures standing nearest to the throne of God. They are also called the Akyəst (Ge’ez: አክይስት “serpents”, “dragons”; an alternate term for Hell) which, along with the cherubim and Paradise, ].[11][12][13]

In the Second Book of Enoch, two classes of celestial beings are equated with the seraphim and cherubim, known as the phoenixes and the chalkydri (Ancient Greek: χαλκύδραι khalkýdrai, compd. of χαλκός khalkós “brass, copper” + ὕδρα hýdra “hydra”, “water-serpent” — lit. “brazen hydras”, “copper serpents”). Both are described as “flying elements of the sun” that reside in either the 4th or 6th heaven, who have twelve wings and burst into song at sunrise.[14]

In the Book of Revelation (4:4–8), the beasts are described as being forever in God’s presence and praising him: “[A]nd they rest not day and night, saying, ‘Holy, holy, holy, Lord God Almighty, which was, and is, and is to come.” This account differs slightly from the account of Isaiah, stating in the eighth verse, “And the four beasts had each of them six wings about him; and they were full of eyes within”. They appear also in the Gnostic text, On the Origin of the World.[15]

The 12th-century scholar Maimonides placed the seraphim in the fifth of ten ranks of angels in his exposition of the Jewish angelic hierarchy. In Kabbalah, the seraphim are the higher angels of the World of Beriah (“Creation”, first created realm, divine understanding),[16]whose understanding of their distance from the absolute divinity of Atziluth causes their continual “burning up” in self-nullification. Through this they ascend to God, and return to their place. Below them in the World of Yetzirah (“Formation”, archetypal creation, divine emotions) are the Hayot angels of Ezekiel’s vision, who serve God with self-aware instinctive emotions (“face of a lion, ox, eagle”). Seraphim are part of the angelarchy of modern Orthodox Judaism. Isaiah’s vision is repeated several times in daily Jewish services, including at Kedushah prayer as part of the repetition of the Amidah, and in several other prayers as well. Conservative Judaism retains the traditional doctrines regarding angels and includes references to them in the liturgy, although a literal belief in angels is by no means universal among adherents. Adherents of Reform Judaism and Reconstructionist Judaism generally take images of angels as symbolic.

An ancient Judean seal from the 8th century BCE depicts them as flying asps, yet having human characteristics, as encountered by Isaiah in his commissioning as a prophet.[17]

Seraphim surround the divine throne in this illustration from the Petites Heures de Jean de Berry, a 14th-century illuminated manuscript, commissioned by John, Duke of Berry.

Medieval Christian theology places seraphim in the highest choir of the angelic hierarchy. They are the caretakers of God’s throne, continuously singing “holy, holy, holy”. Pseudo-Dionysius the Areopagite in his Celestial Hierarchy(vii), drew upon the Book of Isaiah in fixing the fiery nature of seraphim in the medieval imagination. Seraphim in his view helped the Deity maintain perfect order and are not limited to chanting the trisagion. Taking his cue as well from writings in the Rabbinic tradition, the author gave an etymology for the Seraphim as “those who kindle or make hot”

The name seraphim clearly indicates their ceaseless and eternal revolution about Divine Principles, their heat and keenness, the exuberance of their intense, perpetual, tireless activity, and their elevative and energetic assimilation of those below, kindling them and firing them to their own heat, and wholly purifying them by a burning and all-consuming flame; and by the unhidden, unquenchable, changeless, radiant and enlightening power, dispelling and destroying the shadows of darkness[18]

Origen wrote in On First Principles that the Seraphim, in the Book of Isaiah, are the physical representation of the Christ and the Holy Spirit. His rationale comes from the idea that nothing “can wholly know the beginnings of all things and the ends of the universe” aside from God. Origen concludes this section in writing about the Seraphim as beings that have the knowledge of God revealed to them which elevates the role of the Seraphim to divine levels:

Nevertheless whatever it is that these powers may have learned through the revelation of the Son of God and of the Holy Spirit-and they will certainly be able to acquire a great deal of knowledge, and the higher ones much more than the lower-still it is impossible for them to comprehend everything; for it is written, ‘The more part of God’s works are secret. [19]

This quote suggest that Origen believed the Seraphim are revealed this knowledge because of their anointed status as Son of God and the Holy Spirit. He was later criticized for making such claims and labeled a heretic by the Christian church. However, his theory about the Seraphim, as referred to in Isaiah, would be reflected in other early Christian literature, as well as early Christian belief through the second century.

Thomas Aquinas in his Summa Theologiae offers a description of the nature of seraphim:

The name “Seraphim” does not come from charity only, but from the excess of charity, expressed by the word ardor or fire. Hence Dionysius (Coel. Hier. vii) expounds the name “Seraphim” according to the properties of fire, containing an excess of heat. Now in fire we may consider three things.

First, the movement which is upwards and continuous. This signifies that they are borne inflexibly towards God.

Secondly, the active force which is “heat,” which is not found in fire simply, but exists with a certain sharpness, as being of most penetrating action, and reaching even to the smallest things, and as it were, with superabundant fervor; whereby is signified the action of these angels, exercised powerfully upon those who are subject to them, rousing them to a like fervor, and cleansing them wholly by their heat.

Thirdly we consider in fire the quality of clarity, or brightness; which signifies that these angels have in themselves an inextinguishable light, and that they also perfectly enlighten others.

The seraphim took on a mystic role in Giovanni Pico della Mirandola’s Oration on the Dignity of Man (1487), the epitome of Renaissance humanism. Pico took the fiery Seraphim—”they burn with the fire of charity”—as the highest models of human aspiration: “impatient of any second place, let us emulate dignity and glory. And, if we will it, we shall be inferior to them in nothing”, the young Pico announced, in the first flush of optimistic confidence in the human capacity that is the coinage of the Renaissance. “In the light of intelligence, meditating upon the Creator in His work, and the work in its Creator, we shall be resplendent with the light of the Cherubim. If we burn with love for the Creator only, his consuming fire will quickly transform us into the flaming likeness of the Seraphim.”

Bonaventure, a Franciscan theologian who was a contemporary of Aquinas, uses the six wings of the seraph as an important analogical construct in his mystical work The Journey of the Mind to God.

Christian theology developed an idea of seraphim as beings of pure light who enjoy direct communication with God.

Seraphim (Sarufiyyun or Musharifin)[20] rarely appear in Islam. They are mentioned in a hadith from Al-Tirmidhi in a conversation between Muhammad and God during the Night Journey concerning what is between the Heavens and the earth, which is often interpreted as a reference to the “Exalted assembly” disputing the creation of Adam in Surah 38:69.[21] Sometimes the Archangels Jibrāʾīl and Israfil are identified as Seraphim.[22][23] Robert Southey noted an Islamic narration about Angels commanded to prostrate before Adam, whereupon Iblis refused as he boasted about himself being a Seraph created from celestial fire, more excellent than Adam.[24]