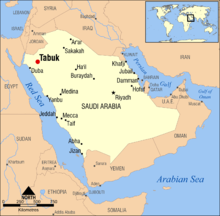 The Expedition to Tabuk, also known as the Expedition of Usra, was a military expedition, which, was initiated by Muhammad in October, AD 630, AH 8. Muhammad led a force of as many as 30,000[1] north to Tabuk in present-day northwestern Saudi Arabia.

A well-known town about 800 kilometers north of Madinah to which the Prophet traveled with 30,000 of his Companions to confront the Romans, who either scattered out of fear, or never gathered.

It proved to be an important journey from the point of training and learning discipline. It was these people who suppressed a massive revolt within the country after the Prophet, overturned two major Empires and planted Islam forever in the populace.

Following rumours of a Byzantine invasion,[1] the Muslims as well as allies of Muhammad, received an urgent call to join the campaign. But the Arabs of the desert showed little interest. Many came up with excuses not to participate. Muhammad provided incentives to persuade the Arabs to join, and provided many with gifts.[2]

Muhammad and his forces, marched northwards to Tabuk in October 630[3] (Rajab AH 9). After arriving at Tabuk and camping there, Muhammad’s army prepared to face the Byzantine invasion.[4] Muhammad spent twenty days at Tabuk, scouting the area, making alliances with local chiefs,[3] and with no sign of the Byzantine army, he decided to return to Medina.[1]