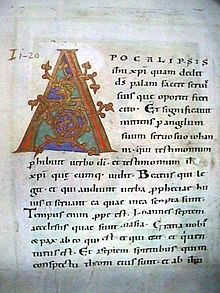 The Book of Revelation 1:1–4 (with the reference to the Seven Spirits) from the Bamberg Apocalypse, 11th century

In the Christian Bible, the term Seven Spirits of God appears four times in the Book of Revelation.[1][2] The meaning of this term has been interpreted in multiple ways.[3]

The seven Spirits of God (ta hepta pneumata tou theou) are mentioned four times in the Book of Revelation, and in the book of Isaiah it names each Spirit.[1][2]

Revelation 1:4: John to the seven churches which are in Asia: Grace be unto you, and peace, from him which is, and which was, and which is to come; and from the seven Spirits which are before his throne;

Revelation 3:1: And unto the angel of the church in Sardis write; These things saith he that hath the seven Spirits of God, and the seven stars; I know thy works, that thou hast a name that thou livest, and art dead.

Revelation 4:5: And out of the throne proceeded lightnings and thunderings and voices: and there were seven lamps of fire burning before the throne, which are the seven Spirits of God.

Revelation 5:6: And I beheld, and, lo, in the midst of the throne and of the four beasts, and in the midst of the elders, stood a Lamb as it had been slain, having seven horns and seven eyes, which are the seven Spirits of God sent forth into all the earth.

The sevenfold ministry of the spirit

An alternative view is that the seven graces (“charisma”) of Romans 12:6–8 reflect the seven spirits of God. The Holy Spirit manifests in humankind through these graces, reflecting the seven spirits of God. The seven graces are: 1. insight (prophecy); 2. helpfulness (service or ministry); 3. instruction (teaching); 4. encouragement; 5. generosity (giving); 6. guidance (leadership); and 7. compassion. This agrees with Isaiah 11:2–3 if “the Spirit of the Lord” is recognized as categorical and “the delight in the fear of the Lord” is added.

Stained Glass in the Church of the Ascension (Johnstown, Ohio) showing fire, a symbol of Holy Spirit

In the New Testament, the Greek term “Dynamis” (translated by some as “Virtues”) suggests a class of exalted spiritual beings; perhaps parallel to the “chief Princes” (Sar rishown) in the Old Testament, of which the Archangel Michael is stated to be one (Daniel 10:13).[6] “Dynamis” is used by the Apostle Paul to refer to spiritual beings in Romans 8:38; Ephesians 1:21, 3:10, 6:12; and Colossians 1:16, 2:10, 2:15. “Powers and principalities” can apply to both angelic and devilish beings, but more often in the New Testament to devilish beings. However, it should be noted, most modern Protestant translators take “Dynamis” to mean “strength”, “power”, or “ability”, whereas the ancient and modern Catholic conception of activity or power was often understood as “virtues”.

Others follow this line of thought, though find the connect to “dynamis” referred to by Paul less likely. It is possible that these seven angels are a special entourage charged with special duties by the Lamb, about whom we have little to no specific knowledge.[7]

Still others look to the apocryphal work 1 Enoch which refers to seven angels who are “watching” creation: Uriel, Raphael, Raguel, Michael, Sarakiel/Suriel (in 9.1), Gabriel, and Phanuel, who is mentioned as one of the four chief angels in 40.9.

Sevenfold may also be connected with the biblical understanding of the number 7 representing perfection. The “Seven Fold Spirit of God” could be the “perfect” Spirit of God, the Holy Spirit.[8]