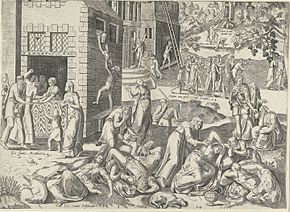 This etching by Frans Hogenberg illustrates the Second Coming of Christ and references the Olivet Discourse. Angels can be seen gathering the elect.[1]

Predestination is a doctrine in Calvinism dealing with the question of the control that God exercises over the world. In the words of the Westminster Confession of Faith, God “freely and unchangeably ordained whatsoever comes to pass.”[2] The second use of the word “predestination” applies this to the salvation, and refers to the belief that God appointed the eternal destiny of some to salvation by grace, while leaving the remainder to receive eternal damnation for all their sins, even their original sin. The former is called “unconditional election”, and the latter “reprobation”. In Calvinism, people are predestined and effectually called in due time (regenerated/born again) to faith by God.

On predestination, the Belgic Confession of Faith (1561) states:

We believe that all the posterity of Adam, being thus fallen into perdition and ruin by the sin of our first parents, God then did manifest himself such as he is; that is to say, merciful and just: Merciful, since he delivers and preserves from this perdition all whom he, in his eternal and unchangeable council, of mere goodness hath elected in Christ Jesus our Lord, without respect to their works: Just, in leaving others in the fall and perdition wherein they have involved themselves. (Art. XVI)

The Westminster Confession of Faith (1643) states:

God from all eternity did by the most wise and holy counsel of his own will, freely and unchangeably ordain whatsoever comes to pass; yet so as thereby neither is God the author of sin; nor is violence offered to the will of the creatures, nor is the liberty or contingency of second causes taken away, but rather established.

By the decree of God, for the manifestation of his glory, some men and angels are predestinated unto everlasting life, and others foreordained to everlasting death.

As God hath appointed the elect unto glory, so hath He, by the eternal and most free purpose of His will, foreordained all the means thereunto. Wherefore, they who are elected . . . are effectually called unto faith in Christ by His Spirit working in due season, are justified, adopted, sanctified, and kept by His power. through faith, unto salvation. Neither are any other redeemed by Christ, effectually called, justified, adopted, sanctified, and saved, but the elect only.

The rest of mankind God was pleased, according to the unsearchable counsel of His own will, whereby He extendeth or withholdeth mercy, as He pleaseth, for the glory of His Sovereign power over His creatures, to pass by; and to ordain them to dishonour and wrath for their sin, to the praise of His glorious justice. (Chap. III — Articles I, III, VI and VII)

All those whom God hath predestinated unto life, and those only, He is pleased, in His appointed time, effectually to call, by His Word and Spirit, out of that state of sin and death, in which they are by nature to grace and salvation, by Jesus Christ; enlightening their minds spiritually and savingly to understand the things of God, taking away their heart of stone, and giving unto them an heart of flesh; renewing their wills, and, by His almighty power, determining them to that which is good, and effectually drawing them to Jesus Christ: yet so, as they come most freely, being made willing by His grace.

Double predestination of the elect and non-elect was taught in pre-Christian Qumran,[3] Gnosticism,[4] and then Manichaeism after 250 CE.[5] In Christianity, the doctrine that God unilaterally predestines some persons to heaven and some to hell originated with Augustine during the Pelagian controversy in 412 CE.[6] Augustine explicitly defended God’s justice in sending newborn and stillborn babies to hell although they had no personal sin.[7] As a disciple of Augustine, John Calvin also taught double predestination.[8] Modern Calvinists respond to the ethical dilemma of double predestination by explaining that God’s active predestination is only for the elect. God provides grace to the elect causing salvation, but for the damned God withholds salvific grace. Calvinists teach that God remains just and fair in creating persons he predestines to damnation because although God unilaterally works in the elect producing regeneration, God does not actively force the damned to sin.[9] It is not the view of any of the Reformed confessions, which speak of God passing over rather than actively reprobating the damned.

Calvin turned to the teachings of Jesus for a theological interpretation of the diversity that some people accept the “covenant of life” and some do not. Pointing to the Parable of the Sower, Calvin observed, “it is no new thing for the seed to fall among thorns or in stony places”.[16] In Jesus’ teaching in John 6:65 that “no one can come to me unless it has been granted him by my Father”, Calvin found the key to his theological interpretation of the diversity.[17]

For Calvin’s biblically-based theology, this diversity reveals the “unsearchable depth of the divine judgment”, a judgment “subordinate to God’s purpose of eternal election”. God offers salvation to some, but not to all. To many this seems a perplexing subject, because they deem it “incongruous that… some should be predestinated to salvation, and others to destruction”. However, Calvin asserted that the incongruity can be resolved by proper views concerning “election and predestination”.[18]

Thus, Calvin based his theological description of people as “predestinated to life or to death” on biblical authority and “actual fact”.[19] Calvin noted that Scripture requires that we “consider this great mystery” of predestination, but he also warned against unrestrained “human curiosity” regarding it.[20] For believers, knowing that “the cause of our salvation did not proceed from us, but from God alone” evokes gratitude.[21]

Calvinists emphasise the active nature of God’s decree to choose those foreordained to eternal wrath, yet at the same time the passive nature of that foreordination.

This is possible because most Calvinists hold to an Infralapsarian view of God’s decree. In that view, God, before Creation, in his mind, first decreed that the Fall would take place, before decreeing election and reprobation. So God actively chooses whom to condemn, but because he knows they will have a sinful nature, the way he foreordains them is to simply let them be – this is sometimes called “preterition.”[22] Therefore, this foreordination to wrath is passive in nature (unlike God’s active predestination of his elect where he needs to overcome their sinful nature).

The WCF uses different words for the act of God’s election and reprobation: “predestinated” and “foreordained” respectively. This suggests that the two do not operate in the same way. The term “equal ultimacy” is sometimes used of the view that the two decrees are symmetrical: God works equally to keep the elect in heaven and the reprobate out of heaven. This view is sometimes erroneously referred to as “double predestination”, on which see above. R. C. Sproul argues against this position on the basis that it implies God “actively intervenes to work sin” in the lives of the reprobate.[23] Robert L. Reymond, however, insists on equal ultimacy of election and reprobation in the divine decree, though he suggests that “we must not speak of an exact identity of divine causality behind both.”[24]

Calvinists hold that even if their scheme is characterized as a form of determinism, it is one which insists upon the free agency and moral responsibility of the individual. Additionally, they hold that the will is in bondage to sin and therefore unable to actualize its true freedom. Hence, an individual whose will is enslaved to sin cannot choose to serve God. Since Calvinists further hold that salvation is by grace apart from good works (sola gratia) and since they view making a choice to trust God as an action or work, they maintain that the act of choosing cannot be the difference between salvation and damnation, as in the Arminian scheme. Rather, God must first free the individual from his enslavement to sin to a greater degree than in Arminianism, and then the regenerated heart naturally chooses the good. This work by God is sometimes called irresistible, in the sense that grace enables a person to freely cooperate, being set free from the desire to do the opposite, so that cooperation is not the cause of salvation but the other way around.

20th-century Reformed theologian Karl Barth reinterpreted the Reformed doctrine of predestination. For Barth, God elects Christ as rejected and chosen man. Individual people are not the subjects of election, but are elected or rejected by virtue of their being in Christ.[25] Interpreters of Barth such as Shirley Guthrie have called this a “Trinitarian” as opposed to a “speculative” view of predestination. According to Guthrie, God freely loves all people, and his just condemnation of sinners is motivated by love and a desire for reconciliation.[26]