History Of The Location Of The Soul

History Of The Location Of The Soul

The search for a hypothetical soul and its location have been a subject of much speculation throughout history. In early medicine and anatomy the location of the soul was hypothesized and studied to be physically located within the body. Today neuroscientists and other fields of science that deal with the body and the mind, such as psychology, bridge the gap between what is physical and what is corporeal. Aristotle and Plato understood the soul as a corporeal form but closely related to the physical world. The Hippocratic Corpus chronicles the evolution of the evolution of thought, that the soul is located within the body and is manifested in diseased conditions. Later, Galen explicitly used Plato’s description of the corporeal soul to physical locations in the body. The logical (λογιστικός) in the brain, the spirited (θυμοειδές) in the heart, and the appetitive (ἐπιθυμητικόν) in the liver.

The Hippocratic Corpus and its many treatises demonstrate the evolving knowledge of the body and how to treat ailments in reference to the soul.[1] The treatise on Diseases II physicians are warned about the illnesses associated with air in the body, particularly in the lungs causing the patient to cough vigorously and hoarsely.[1]

translated as “the patient is breathing through their lungs”.[1] The next lines detail that this is an extremely serious time condition for the patient and was a cause of great concern. To remedy the air in the lungs the physician was advised to clear out the lungs of all air that was possible using a bladder and hosing.

Later in the Corpus, during or after the life of Aristotle on Disease IV, pneuma, or air is presented as a warming life force. In the treatise On the Sacred Disease air is described as not being located in just the lungs but in the entire body and circulating it giving life.[1] According to the treatise the first location of the air is to the brain and it describes that medical conditions of the brain can be caused by a blockage of air flow there.[1] Aristotle in his works refers to pneuma being directly related to the soul.

In De Spiritu Aristotle links the idea of pneuma and the soul directly together saying that “Pneuma is connected to the soul” that, “it is the souls primary driving force”.[2]

Aristotle in De Anima (On the Soul) suggests that organs of the body are required for the soul to interact with. In book II, Aristotle states that, the soul is the part of the human that allows its entire being, that one can’t exist without the other and they complement each other. In book III he provides an example of his theory of the soul and makes the correlation between the physical sensations of light the phaos in the body and the corporeal imaginations phantasia.[3] Aristotle imagined the soul as in part, within the human body and in part a corporeal imagination. In Aristotle’s treatise On Youth, Old Age, Life and Death, and Respiration, Aristotle explicitly states that while the soul has a corporeal form, there is a physical area of the soul in the human body, the heart. Aristotle states the heart is the location of the 5 sensations of the body and is directly responsible for respiration and the sustenance of life.[4] The heart is of further importance as it is all animal’s area of heating the body and blood and the creation of pneuma, or life force that animates the body.[4] To Aristotle this explains why dead things become cold, do not breath, and that their souls have left them. 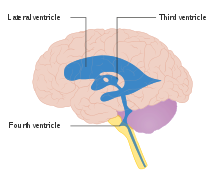 Image depicting the third and fourth ventricle. Herophilus thought as these were the seat of the soul.

In the third century Herophilos in Alexandria was one of the first anatomists to perform dissections of the human body for the brief time that it was legal.[5] Herophilos discovered many novel aspects of the human body, specifically in the brain and associated tissues.[6] The works of Herophilus were lost in the fire of Alexandria of 391 AD and therefore we only know of his existence in other surviving works. Most of the medical terminology and works are recorded in the books by Galen and therefore the reliability that Herophilus actually thought to the soul to be in the body is in question.[6]

According to the recordings of his work Herophilus thought that the location of the soul is in the brain, specifically in the ventricles of the brain, the 4 open cavities in the innermost parts of the brain. Herophilos describes the distinction of the soul and natures as being intertwined within the body and while are separate things, cannot exist without the other. Herophilos in his dissections discovered the differences between nerves and blood vessels.[6] Nerves carried the pneuma or soul to animate the body and the vessels being related to nature. Following the lines tracks of the nerves through the body he saw that they all converge in the brain, and by Herophilus’ reasoning the ventricles of the brain.[6] Of particular importance to the location of the soul was the 4th ventricle of the brain.

In his treatise, On Anatomy, pneuma was inhaled by the lungs and sent to the brain ventricles via the vessels of the body where the brain would convert it into what he called “psychic pneuma”, or the soul, and produce thought, motion and all other animations of the body. Herophilus discovered the bumpy aspect of the walls of the ventricles of the brain that he called the choroid plexus and which was thought to be the interaction of the brain with the pneuma to create the psychic pneuma and then these were sent out via the nervous system.[5] He further identified 8 of the cerebral nerves and tracked them to the spinal cord and throughout the body. The choroid plexus is the term still used today and are the structures that produce cerebrospinal fluid.[7]

Galen was one of the most foundational physicians in history and is known for careful and detailed vivisection and dissections of animals that was foundational to modern medicine. Galen was known for his treatises on being both a physician and a philosopher and was well versed in the works of Plato. His medical anatomy is described through the use of Plato’s corporeal ideals of the soul. The heart was the spirited, the liver the appetitive, and the brain the logical.[8]

Galen states in On Respiration and the Arteries “one must determine by dissection that the number and nature of the structures that connect the heart to the brain” and it was observed that when these nerves were cut in animals they would lose their voice and when veins were cut they would bleed, but retain their voice.[9] Therefore the brain does not need the heart to feel or create sensations and the heart does not need the brain to move. Galen recognized the importance of both the heart and the brain in the proper functioning of a human but saw these as two distinct system governed separately.[9] Therefore there are two souls in combat, the brain representing the logical soul and driving logical being, the heart representing spirited actions of movement and impulse constantly at odds with each other and supplied by different supporting systems.

Galen states the “liver is the archai” or the source of the veins and blood of the body and is therefore important in regards to the appetitive soul, but does little to elaborate further on the reason for its connection on why this makes it appetitive.[9] He continues to theorize that the “spleen purifies the liver” but does not while the spleen does not purify the liver it highlight the anatomical connections of the human body.[10] Galen addresses that the proof for the liver is not as obvious as it was in the case of the heart and the brain.[9]