From Hebrew Bible to Christian Bible: Jews, Christians and the Word of God. In his teaching, Jesus often quoted the Jewish Scriptures; after his death, his followers turned to them for clues to the meaning of his life and message.

Some sacred texts form the cornerstone of a religion, instilling law, character and spirituality in its people; some are narratives of historical figures in the faith. A text might be viewed as the unchanging “Word of God;” other texts are revised and expanded by later generations. Texts can be literal, or metaphorical, or both. 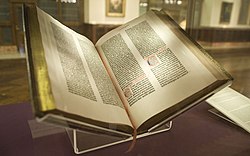 The Bible is the sacred book in Christianity.

Christianity, like other religions, has adherents whose beliefs and biblical interpretations vary. Christianity regards the biblical canon, the Old Testament and the New Testament, as the inspired word of God. The traditional view of inspiration is that God worked through human authors so that what they produced was what God wished to communicate. The Greek word referring to inspiration in 2 Timothy 3:16 is theopneustos, which literally means “God-breathed”.

Some believe that divine inspiration makes our present Bibles inerrant. Others claim inerrancy for the Bible in its original manuscripts, although none of those are extant. Still others maintain that only a particular translation is inerrant, such as the King James Version. Another closely related view is biblical infallibility or limited inerrancy, which affirms that the Bible is free of error as a guide to salvation, but may include errors on matters such as history, geography or science.

The books of the Bible accepted by the Orthodox, Catholic and Protestant churches vary somewhat, with Jews accepting only the Hebrew Bible as canonical; there is however substantial overlap. These variations are a reflection of the range of traditions, and of the councils that have convened on the subject. Every version of the Old Testament always includes the books of the Tanakh, the canon of the Hebrew Bible. The Catholic and Orthodox canons, in addition to the Tanakh, also include the deuterocanonical books as part of the Old Testament. These books appear in the Septuagint, but are regarded by Protestants to be apocryphal. However, they are considered to be important historical documents which help to inform the understanding of words, grammar and syntax used in the historical period of their conception. Some versions of the Bible include a separate Apocrypha section between the Old Testament and the New Testament.The New Testament, originally written in Koine Greek, contains 27 books which are agreed upon by all churches.

Modern scholarship has raised many issues with the Bible. While the Authorized King James Version is held to by many because of its striking English prose, in fact it was translated from the Erasmus Greek Bible which in turn “was based on a single 12th Century manuscript that is one of the worst manuscripts we have available to us”. Much scholarship in the past several hundred years has gone into comparing different manuscripts in order to reconstruct the original text. Another issue is that several books are considered to be forgeries. The injunction that women “be silent and submissive” in 1 Timothy 2 is thought by many to be a forgery by a follower of Paul, a similar phrase in 1 Corinthians 14, which is thought to be by Paul, appears in different places in different manuscripts and is thought to originally be a margin note by a copyist. Other verses in 1 Corinthians, such as 1 Corinthians 11:2–16 where women are instructed to wear a covering over their hair “when they pray or prophesies”, contradict this verse.

A final issue with the Bible is the way in which books were selected for inclusion in the New Testament. Other Gospels have now been recovered, such as those found near Nag Hammadi in 1945, and while some of these texts are quite different from what Christians have been used to, it should be understood that some of this newly recovered Gospel material is quite possibly contemporaneous with, or even earlier than, the New Testament Gospels. The core of the Gospel of Thomas, in particular, may date from as early as AD 50 (although some major scholars contest this early dating), and if so would provide an insight into the earliest gospel texts that underlie the canonical Gospels, texts that are mentioned in Luke 1:1–2. The Gospel of Thomas contains much that is familiar from the canonical Gospels—verse 113, for example (“The Father’s Kingdom is spread out upon the earth, but people do not see it”), is reminiscent of Luke 17:20–21—and the Gospel of John, with a terminology and approach that is suggestive of what was later termed Gnosticism, has recently been seen as a possible response to the Gospel of Thomas, a text that is commonly labelled proto-Gnostic. Scholarship, then, is currently exploring the relationship in the Early Church between mystical speculation and experience on the one hand and the search for church order on the other, by analyzing new-found texts, by subjecting canonical texts to further scrutiny, and by an examination of the passage of New Testament texts to canonical status. 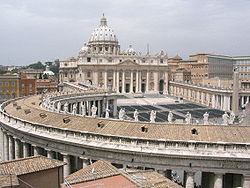 St. Peter’s Basilica, Vatican City, the largest church in the world and a symbol of the Catholic Church

In antiquity, two schools of exegesis developed in Alexandria and Antioch. Alexandrian interpretation, exemplified by Origen, tended to read Scripture allegorically, while Antiochene interpretation adhered to the literal sense, holding that other meanings (called theoria) could only be accepted if based on the literal meaning.[159]

Catholic theology distinguishes two senses of scripture: the literal and the spiritual.

The literal sense of understanding scripture is the meaning conveyed by the words of Scripture. The spiritual sense is further subdivided into: 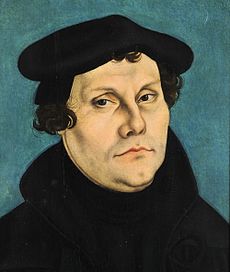 Protestant Christians believe that the Bible is a self-sufficient revelation, the final authority on all Christian doctrine, and revealed all truth necessary for salvation. This concept is known as sola scriptura. Protestants characteristically believe that ordinary believers may reach an adequate understanding of Scripture because Scripture itself is clear (or “perspicuous”), because of the help of the Holy Spirit, or both. Martin Luther believed that without God’s help Scripture would be “enveloped in darkness”. He advocated “one definite and simple understanding of Scripture”. John Calvin wrote, “all who refuse not to follow the Holy Spirit as their guide, find in the Scripture a clear light”. The Second Helvetic Confession, composed by the pastor of the Reformed church in Zürich (successor to Protestant reformer Zwingli) was adopted as a declaration of doctrine by most European Reformed churches.

Protestants stress the meaning conveyed by the words of Scripture, the historical-grammatical method. The historical-grammatical method or grammatico-historical method is an effort in Biblical hermeneutics to find the intended original meaning in the text. This original intended meaning of the text is drawn out through examination of the passage in light of the grammatical and syntactical aspects, the historical background, the literary genre as well as theological (canonical) considerations. The historical-grammatical method distinguishes between the one original meaning and the significance of the text. The significance of the text includes the ensuing use of the text or application. The original passage is seen as having only a single meaning or sense. As Milton S. Terry said: “A fundamental principle in grammatico-historical exposition is that the words and sentences can have but one significance in one and the same connection. The moment we neglect this principle we drift out upon a sea of uncertainty and conjecture.”Technically speaking, the grammatical-historical method of interpretation is distinct from the determination of the passage’s significance in light of that interpretation. Taken together, both define the term (Biblical) hermeneutics.

Some Protestant interpreters make use of typology.